The modern women’s movement has accomplished much over the past 50 years, enabling society to benefit from women’s ingenuity and giving women agency over their lives. It’s opened doors of opportunity, granting women access to STEM (science, technology, engineering and math) higher education and careers. That fact that women now dominate health-related areas of STEM is a success story. However, women have not yet achieved parity in every other area of STEM.

The Importance of STEM for Women in Global Trade

Women’s involvement in STEM and global trade benefits us all. According to the UN, “Women’s economic empowerment boosts productivity, increases economic diversification and income equality in addition to other positive development outcomes.” Furthermore, women’s economic equality has a positive effect on business. Companies that employ women and put them in leadership positions have higher levels of organizational effectiveness and growth. Having three or more women in senior management improves all areas of organizational performance. However, women are only qualified for these positions when they are educated and have chosen careers in business and in STEM.

The same goes for traded goods themselves; the world’s most traded goods—cars, refined petroleum, integrated circuits, pharmaceuticals, telephones and broadcasting equipment all require STEM educations and careers for their production.

Production and refinement of the world’s most traded goods requires education and careers in the life sciences (biotech), physical sciences, computer science, engineering and math. So how do women fare in this areas?

The Pew Research Center surveyed men and women in these fields in 1990, 2000, 2010 and again in 2016. Over the 26-year span of the survey, the percentage of women in most of these fields went up. The life sciences saw the biggest influx of women: growing from 34% in 1990 to 47% in 2016. Math has only seen 3% growth, and women made up 46% of respondents working in math-related fields in 2016. While the life sciences and math-related fields have not achieved full parity, these numbers come very close.

Women’s employment in physical science-related careers has gone up 17% since 1990, totaling 39% in 2016. There are still very few women in the field of engineering. In 1990 only 12% of people working in this field were women, and in 2016 that number only increased by 2%. Clearly, more research must be done to understand why women are not choosing engineering careers, and educational opportunities must be offered. But the worst news is in the field of computer science.

In 1990, 32% of those working in the computer sciences were women. By 2016 that number has decreased, down 7% to 25%. What do these dire numbers for computer science and engineering look like? Statistically, at any given IT company or department, every fourth employee is a woman. Go to an engineering firm and it’s closer to every fifth. If women do not work in the fields of computer science and engineering, women’s interests, insights and perspectives will not be represented in the work these firms do. That affects women in global trade, as goods like computers, integrated circuits, cars, refined petroleum and telephones all require careers in these two fields. 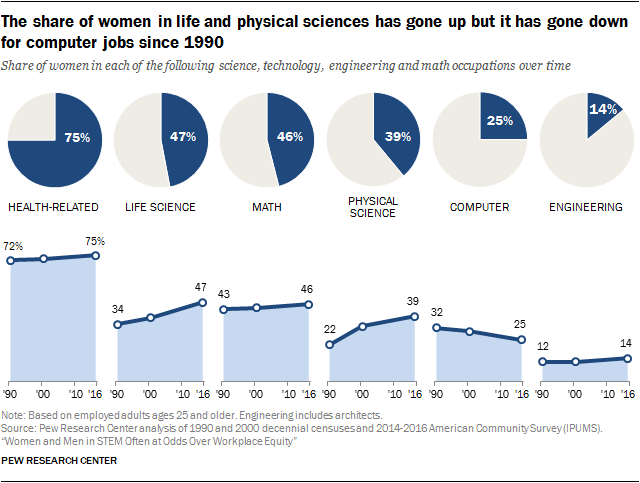 So what’s going wrong with computer science and engineering? Women who go into these careers report high levels of gender-based discrimination.

To Improve the Condition of Women in Global Trade, Address Sexism in Education

Before women can pursue careers in computer science and engineering they must first be interested in those fields, and receive an education in them. According to the National Girls Collaborative, during the K-12 years, boys and girls perform equally well in math and science on standardized tests. In fact, in 2016 4% more girls enrolled in advanced science courses than boys.

However, the disparity starts to emerge in high school. Male students in 2016 were more likely to take engineering, at rates of 3% versus 1%. They were more likely to take computer science, at rates of 7% versus 4%. Finally, they enrolled in AP Computer Science at staggeringly high rates compared to female students, at a ratio of 81% male to 19% female.

In 2016, collegiate women received more than half of the bachelor’s degrees awarded in the biological sciences, but only 17.9% of computer science degrees, and 19.3% of engineering degrees. The numbers are worse for minority women.

In grade school, students who came from diverse racial and ethnic backgrounds were less likely to score well in mathematics and science on standardized tests, and students who came from less-educated parents or from lower socioeconomic status-backgrounds were less likely to take science courses. The divide widens for minority women in college. In 2012, minority women were awarded only 4.1% of doctorate degrees in engineering and science.

Clearly women—especially minority women—are not receiving the education needed to pursue careers in computer science and engineering. But what happens to the few that do go into these fields?

What Computer Science and Engineering Careers are Like for Women

According to the National Girls Collaborative Project, women represent half of America’s college-educated workforce. If parity were achieved in STEM, it would seem that half of this workforce would be composed of women as well. So what experiences do female computer scientists and engineers have that discourage young women from joining or staying within those fields?

According to a study done by Frontiers in Psychology, stereotypes deter young women from entering the field of computer science. Many people believe that the mathematical skills needed to enter computer science are too hard. This stereotype disproportionately affects women, who historically have been discouraged from pursuing math as an interest and occupation.

Some women expect that the male-dominated world of computing will be hostile toward them, thus escalating the shortage of women. This perception probably began with women’s reports of  male hostility, and difficulty being heard by male co-workers in the workplace. There’s also a stereotype that computer science is an antisocial field, and that its demanding schedule will leave women with little time for relationships. Finally, there’s the stereotype that computer science isn’t feminine, a stereotype furthered by male-dominated gaming culture and t.v. shows.

On the engineering side of STEM, things are no better. According to MIT News, women who set out to become engineers stick with the profession less than men. Women experience negative group dynamics like marginalization in a variety of settings. Women are often assigned menial tasks, which historically has been a hallmark of sexism. Women report having negative experiences working on team-based projects, like being assigned routine tasks while their male counterparts tackle the challenging problems. How disappointing it must be to graduate from college and land a job in a dream field—only to not be fully engaged or valued in the workforce. No wonder women abandon or avoid engineering careers.


Compliance is an especially bright spot for women in global trade.

Other global trade industry leaders have noted the importance of mentoring in their professional development. SAP Germany’s Daniela Dung mentioned the company’s Leadership Excellence Acceleration Program in a recent interview.

While the advancement of women in health-related fields is positive, society must acknowledge that the lack of women in computer science and engineering represents a lack of progress. We need more women in these fields. Not only because we value equality as a society, but because women enhance these professions with their unique experience, intelligence and passion. Furthermore, these fields face a shortage of qualified personnel. The demand for computer scientists is higher than the number of graduates in the field. Why not fill those jobs with women?

Women were not allowed to participate in the scientific and intellectual movements that allowed humanity to progress; from the thought-revolution of ancient Greece, to the invention of the scientific method, to the enlightenment. Only half of humanity’s brain power was applied to these movements, and we can only imagine what women could have contributed.

The exclusion of women from these fields isn’t one that we can cure overnight, but as the progress made in the other areas of STEM proves, it can be done. One method is to educate society, both men and women, about women’s ability to perform well in these areas. Another is to showcase the achievements of women who currently are in these fields, which inspires girls and raises awareness of women’s success. Finally, we can offer computer science and engineering scholarships to women, and provide more funding for women-led initiatives in these fields. But doing so reveals yet even more sexism; women entrepreneurs are less likely to raise $100,000 or more in business funding.

By identifying sexism wherever it lies we can work to improve women’s prospects in STEM. Not only will this give women more personal liberty, but it will allow society to benefit from their contributions. And by including women in these highly technical careers, we can improve the contributions made by women in global trade.

Pinary, Inc. has a perfect record of successful SAP work, and has turned around many systems with critical issues and unproductive processes. If you have questions about SAP trade solution, get in touch. Contact us today. GET STARTED 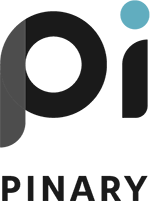 Pinary, Inc. has been a leading SAP integrator for over twenty years. Whether you require an enhancement, upgrade, or full ERP deployment, partner with a firm with a proven track record of successful implementations.

We use cookies on our website to give you the most relevant experience by remembering your preferences and repeat visits. By clicking “Accept”, you consent to the use of ALL the cookies.
Cookie settingsACCEPT
Manage consent

This website uses cookies to improve your experience while you navigate through the website. Out of these, the cookies that are categorized as necessary are stored on your browser as they are essential for the working of basic functionalities of the website. We also use third-party cookies that help us analyze and understand how you use this website. These cookies will be stored in your browser only with your consent. You also have the option to opt-out of these cookies. But opting out of some of these cookies may affect your browsing experience.
Necessary Always Enabled
Necessary cookies are absolutely essential for the website to function properly. This category only includes cookies that ensures basic functionalities and security features of the website. These cookies do not store any personal information.
Non-necessary
Any cookies that may not be particularly necessary for the website to function and is used specifically to collect user personal data via analytics, ads, other embedded contents are termed as non-necessary cookies. It is mandatory to procure user consent prior to running these cookies on your website.
SAVE & ACCEPT